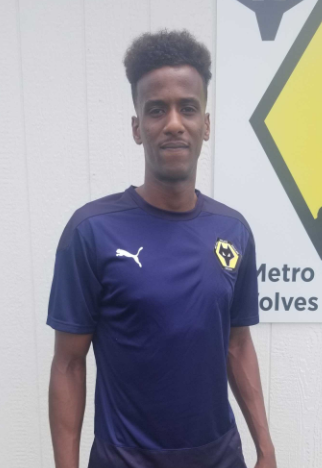 Coach Sodal joined Wolves for the 2022-23 season to coach the U11 Boys team. And to train all players in the club on a continuous basis.

A graduate of Omaha Westside, he led the Warriors to the Class A state championship game in back to back seasons and was named first team all-state in his junior and senior years.

“Ali Sodal has left a lasting impression on the Midland University men’s soccer program. Through his speed, work ethic, and uncanny ability to score goals, Ali leaves Midland soccer as the all-time leading goal scorer. He’s a team player, leader, and dedicated individual that has all of the potential to play soccer at the next level. We are extremely proud of Ali and all of his accomplishments and see a very bright future for him in the game of soccer. ”

Coach Sodal set single-season program records for goals (24) and points (55) as a senior in 2016. He also the program’s single-game record with 10 points in a game on October 8, 2016 (4 goals and 2 assists). That year he was also named a third team NAIA All-American.

He finished his career as Midland’s all-time career leader in goals (49) and points (115).

After college, Sodal played professionally for the Omaha Kings. In the 2020-21 season, he scored 20 goals in 14 games with 6 assists.

In 2021-22 he completed his first season with the Kansas City Comets. As a midfielder, he had 4 goals and an assist in 14 games.

From a young age I started playing street soccer and learned the game that way. Once I came to the USA, I joined club teams in and around Omaha.

I like that you guys try to create a platform where the kids can showcase their love for soccer.

Cristiano Ronaldo is my favorite soccer player because he is the best.

My favorite thing about soccer is that it makes people happy no matter what is happening in their lives.

Favorite part of working with kids is, seeing kids give you 100% effort and them seeing the results.